Thyroid nodule (a lump or swelling in the thyroid gland) is a common occurrence and is seen in about 10-12% of the normal population. The vast majority of these nodules are benign and not dangerous and unless progressing or causing symptoms, they can be left alone and not operated upon. However, a small percentage (about 5%) of these nodules can be cancerous (malignant) and surgery becomes mandatory to remove the diseased gland. Quite often, the challenge is to differentiate between benign and cancerous nodules. Clinical examination and investigations such as ultrasound and needle aspiration (FNAC) can often help in determining the risks of cancer and nodules that have a higher chance of being malignant are usually operated upon. Sometimes the surgeon may order an intra-operative pathological examination (frozen section) to determine if the nodule is malignant or not.

In experienced hands, thyroidectomy surgery is a safe operation and the cosmetic outcomes are very satisfactory with a minimal scar that fades with time. In recent times, the option of remote access surgery (surgery from a distant site such as the armpit or inner aspect of the lip using specialized techniques) can be offered if the patient is desirous of avoiding a visible scar in the neck. During surgery, if the nodule is restricted only to one side and is not malignant, then only one half of the gland is removed (hemithyroidectomy) and if the entire gland has nodules or if the nodule is malignant, then total removal of the thyroid gland (total thyroidectomy) is the recommended treatment. Total thyroidectomy is a safe operation and the patient has to take a thyroid hormone replacement medication (thyroxine) throughout life. 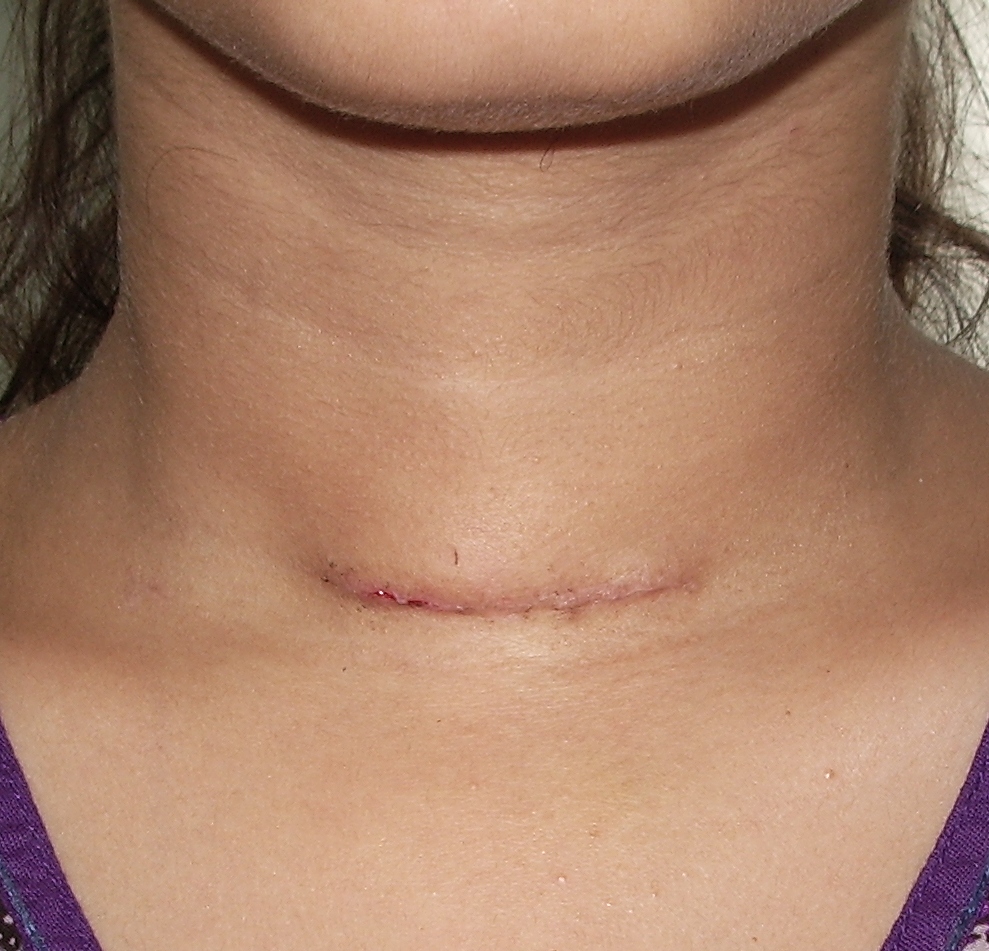 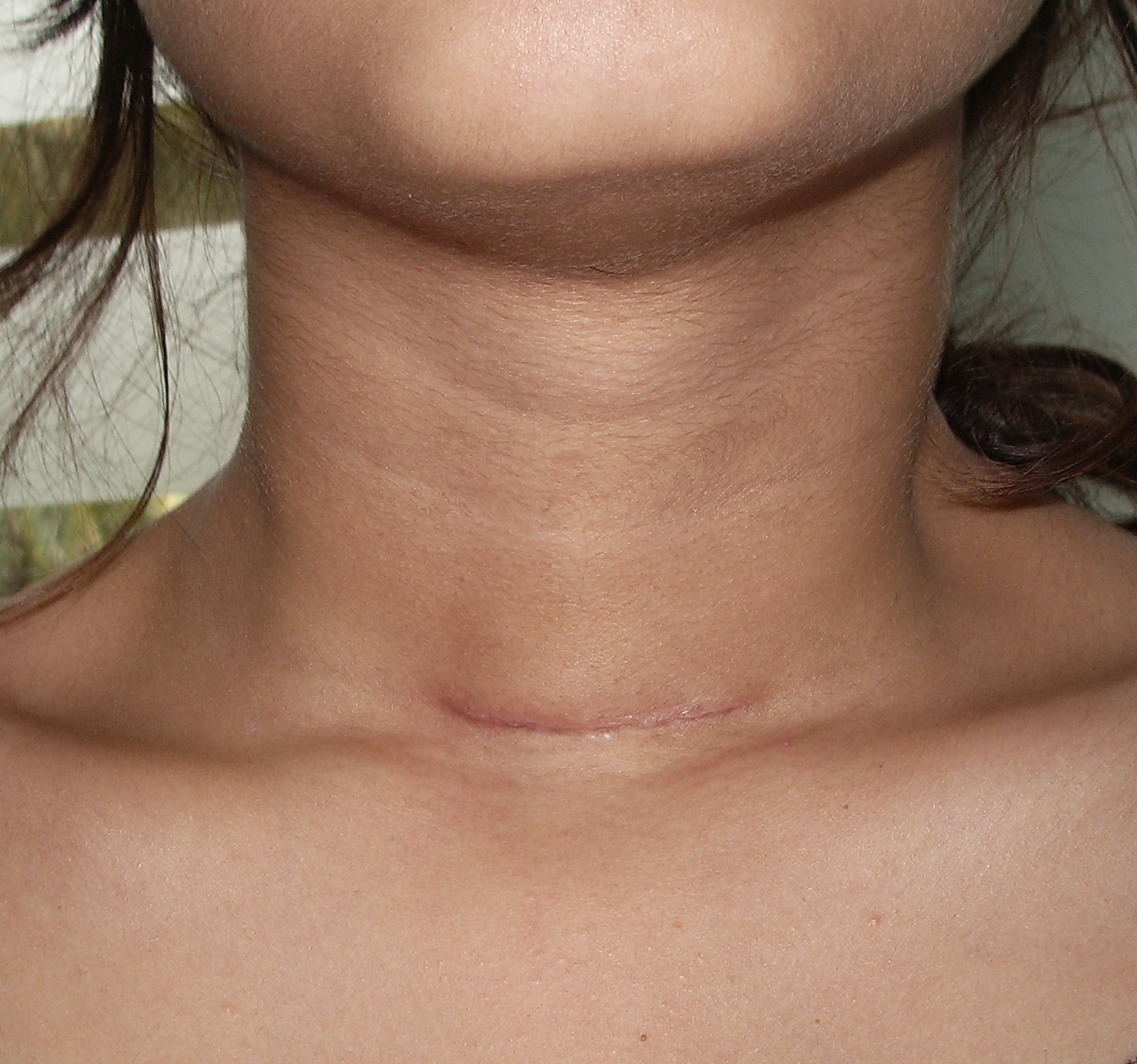 Cancer of the thyroid gland is uncommon cancer and accounts for just about 1%–1.5% of all cancers. Though in India no clear data is available, in the USA, the incidence of this cancer has shown a 2.4-fold increase in the last three decades (from 3.6 per 100,000 of the population in 1973 to 8.7 per 100,000 in 2004). This is believed to be due more to better diagnostic facilities such as ultrasound, which can pick up thyroid nodules much earlier, rather than any true increase in the incidence of cancer. Exposure to ionizing radiation is one of the known risk factors for the development of thyroid cancer and cancer often develops decades after the exposure has occurred.

The regular type of thyroid cancer (commonly referred to as well-differentiated thyroid cancer) is one of the most curable cancers known and provided that adequate surgery is performed, most (95%) of the younger patients (below 45 years of age) with this cancer live their normal lifespan. Surprisingly, older patients with this cancer do not do so well. This is the only cancer in which the age of the patient is a very important factor determining the aggressiveness of cancer and survival. One variant of thyroid cancer, the medullary carcinoma of thyroid or MCT, has a genetic basis and a sub-group of patients with this condition have been found to carry an abnormal gene, the RET proto-oncogene. The identification of this gene in subjects at risk (first-degree relatives of those with familial MCT) can predict with 100% accuracy the future development of thyroid cancer.

The recommended treatment for thyroid cancer is surgery – Total thyroidectomy. If surrounding lymph nodes are involved then a neck dissection (removal of the lymph glands along with surrounding fat) is also done. Post-surgery a certain section of patients (older patients, those with large tumours, lymph nodes spread or spread into other parts of the body) are treated with high-dose radio-iodine therapy, which is administered a month after surgery. This treatment is routinely given post-operatively to all high-risk thyroid cancer patients to eradicate any cancer which may not have been addressed by surgery or to destroy microscopic cancer that may be lurking unseen in any part of the body. Thyroid tissue (cancerous or otherwise) concentrates iodine and the radioactivity in the administered iodine destroys it. Following this treatment, patients are kept isolated in a special room for 24-48 hours, since the radioactivity could be harmful to others around them.
Following the completion of treatment, patients are put on thyroid replacement hormone (thyroxine) the dose of which is higher than when used as replacement therapy in benign conditions and are regularly followed up with serial serum thyroglobulin estimations.

Watch this movie to learn more about Thyroid cancer