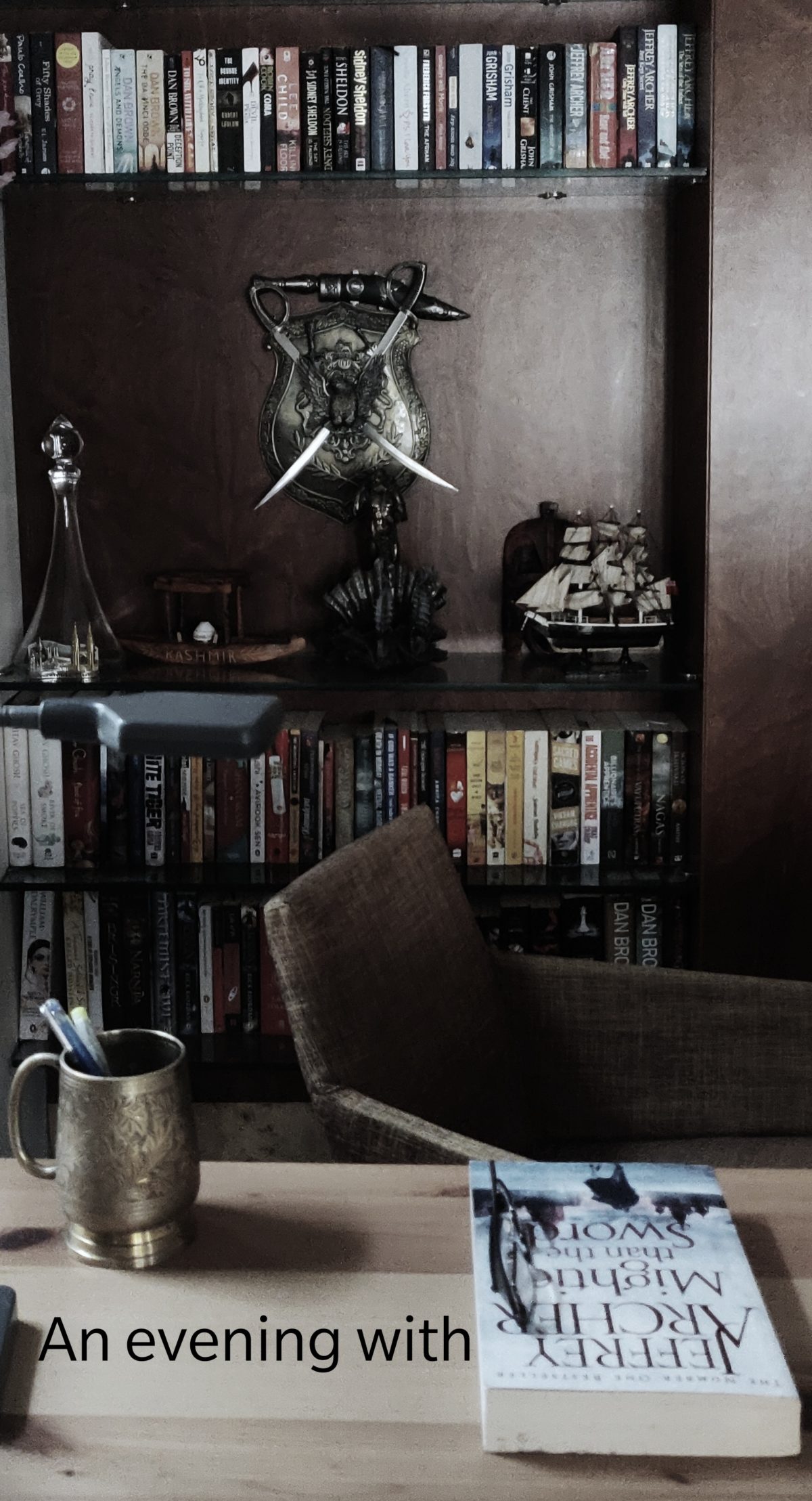 With the world coming to a standstill, it is time to re-visit the works of our favorite authors.  Going through my modest collection of books, my eyes glanced upon an author-signed copy of Jeffrey Archer’s ‘Mightier than the Sword’. Leafing through the pages took me back to the time when I came face-to-face with the legendary author…

I received the SMS when I was in Delhi participating in a book-release function. My immediate thought was that I had to attend the event, but got busy once I returned to Hyderabad and forgot about the invite.

The day before the event, my sister sent me a picture in connection with his visit to Bangalore and reminded me of his visit to Hyderabad the following day. It was part of his 5–city tour of India to promote his just released novel ‘Mightier than the Sword’. She cautioned me that organizers had a tough time managing the surging crowds and she had been unsuccessful in getting a signed copy.

My wife and I reached the venue in the atrium of a busy mall, well ahead of the time mentioned in the invitation to ensure we had seats to sit.  The place started filling up as we took turns to hold on to our seats and helped ourselves to tea and snacks.  On the dot at 6.30 he showed up – to a thunderous ovation from the crowd. Once the applause settled down he started with a caustic comment about England’s poor performance at the just then concluded World Cup.  The ensuing discussions about cricket and England’s misfortunes on the field endeared him to the crowd and from then there was no looking back. With his ready wit and dry English humor he built a rapport with the audience quoting interesting anecdotes in connection with his journey from humble beginnings as a writer to fame.

One of the disagreeable experiences he said he got accustomed to was that after the release of his first book ‘Not a penny more, not a penny less’ (1976), every month he had to request his publisher to print extra copies without which printing would be put on hold. This kept happening despite book copies getting sold as soon as they were published. Even when millions of copies got sold, they continued to expect him to put a formal request to print copies as they got sold out – which was both frustrating and flabbergasting.

He quickly clarified that his publishers were not always unkind to him. When ‘Kane and Able’ became a huge success in U.K., they sent him to the U.S. in great style on a Concorde to participate in a series of television shows to promote the book. He recounted some his blunders during his interaction with the American media which to his discomfiture insisted on calling him ‘Jeff’. Finally it was Johnny Carson’s show that catapulted his novel overnight into fame and into the New York Times #1 best-seller list making him an international celebrity. With a smile he admitted that he was no writer, just a ‘damn good story-teller’!

At the Q&A session, I tentatively took the mike,

He whirled around, spotted me, wished me back. I introduced myself as a writer of medical fiction. His eyes lit up; with a quick bow he proceeded to answer my question ‘why do most authors tend to be biographical in their writings’ to my utmost satisfaction.

He then picked on a young girl who shyly asked him how she could become a writer. He eyes glinting mischievously as he invited her to the stage; “You want to be a writer…let me humiliate you first”. I felt sorry for the girl as she self-consciously   made her way cautiously up the stage in her high-heels. But then he very sweetly explained to her how she should be pursuing her dreams. Once he was done he turned to the audience with a flourish and said “Here is a 12-year-old girl who wants to write a book… this, ladies and gentleman, is the future of Indian writing.” A moment that would remain etched in the girl’s mind forever and fuel her on the path to achieve her ambitions.

Despite the serpentine queue lined up to meet him, we decided to take our chances. He recognized me from my interaction earlier, signed his books, autographed me a copy of my own novel and accepted the copy which I gifted him.

Later, a couple of people in the line requested me to sign for them copies of my new book that they picked up from the Crossword store upstairs which added further flavor to a perfect evening.